A two-year weekly posting of Teisho on the 100 cases of the Hekiganroku, The Blue Cliff Record.

The Hekigan-roku or Blue Cliff Record was composed by two of the greatest Zen ancestors, and they never knew one another, living in China 100 years apart. Hseueh-tou (Jp. Setcho, 980-1052), a successor in the Unmon School, gathered 100 brief excerpts from the biographies of Zen master teachers. These “cases” bring us into the lives of these ancestors, showing their interactions with their communities and individual students. Hseueh-tou wrote a verse for each case and left us his succinct, acerbic, most often humorous comments on aspects of each case and on his verses. These are called in Japanese, jakugo or “capping phrases.”

After four decades of studying this text and two decades of teaching it to senior students, Genki felt an urge to speak with Hseuh-tou and Yuan-wu himself. Afterward, wash your eyes and ears out well, if you were foolish enough to bend down and listen. 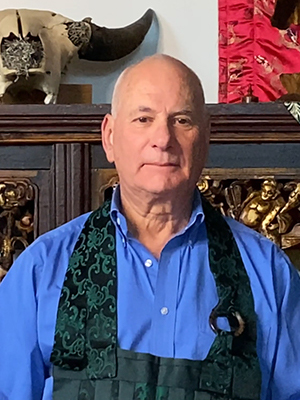 One of the living Zen masters of our time, Roshi Genki augments traditional Zen practices with modern psychology, philosophy, science, and socially engaged service to marginalized and disadvantaged communities. He has developed a thorough and profound holistic approach to Zen practice that offers personal and inter-relational development for skillful living in the world with love, service and joy. Roshi Genki describes this approach to spirituality as The Practice of Presence and Reclaiming the World. Roshi Genki emphasizes that the Zen training hall is our daily life, our way of being in the world with ourselves, our intimate circle, our work and our communities.